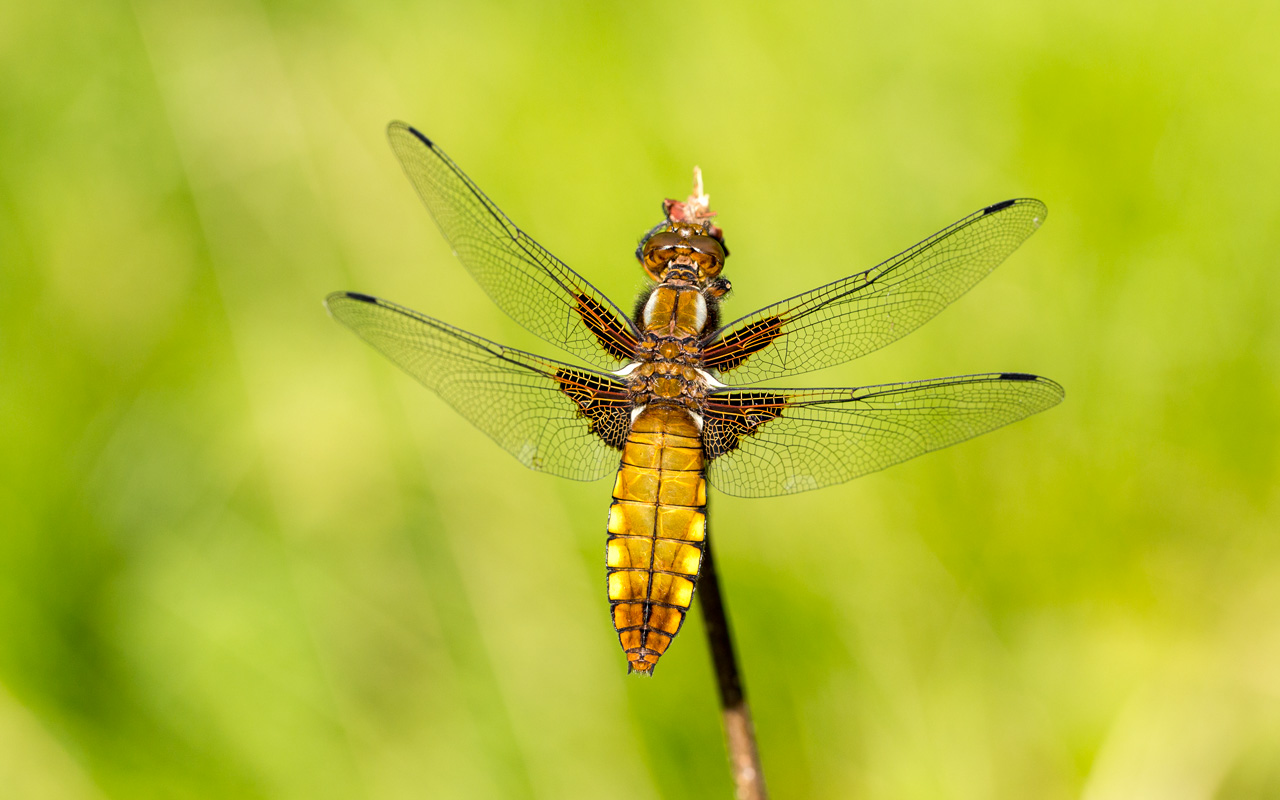 The dragonfly season of 2015 ended several months ago, and while waiting for the next season to start, I have made a summary of the past season.

Spring and most of the summer was relatively cold and rainy, which resulted in a late season start and a general low abundance of especially some of the earlier species. The emergence of many species was also delayed because of the cold weather. Even though the early fall had some warm sunny days, this season left much to be desired in comparison to 2013 and 2014.

Early in the season, most of my dragonfly trips where to the location Rands Fjord, but I also visited Uldum Kær once. I had several trips to some of the good locations around the city of Ry, but did not get that many photos due to bad weather. Later in the season I mainly went by Randalparken and two, for me, new locations called Terpenshøje and Vasebakke. End of season where again spent at Rands Fjord.

Start May I observed the first specimens of Pyrrhosoma nymphula followed by Coenagrion pulchellum, Cordulia aenea and Brachytron pratense later the same month.

In early June Libellula quadrimaculata and Libullula depressa started to appear, actually quite numerous. The species Gomphus vulgatissimus and Libellula fulva, which were very abundant at this time last season, were almost absent. I only spotted one Gomphus vulgatissimus and a few Libellula fulva during the entire season. Other species observed in June were Coenagrion puella, Calopteryx splendens, Calopteryx virgo, Leucorrhinia dubia, Ischnura elegans, Erythromma najas, Orthetrum cancellatum, Enallagma cyathigerum and Coenagrion hastulatum.

In late June and in July I was lucky to see and photograph the Aeshna isoceles twice at my favorite loaction Rands Fjord. Other species that appeared in July were Aeshna grandis, Aeshna cyanea, Sympetrum sanguineum and Anax imperator, the latter in relatively great numbers and at many locations.

In August Lestes viridis emerged in great numbers at the location Randalparken close to where I live. Some of the other species observed in August and September were Aeshna mixta, Aeshna grandis, Aeshna cyanea, Lestes sponsa, Lestes dryas, Sympetrum vulgatum, Aeshna viridis, Sympetrum striolatum, Sympetrum flaveolum and Sympetrum sanguineum. Both Aeshna grandis and Aeshna cyanea emerged rather late this season, but especially Aeshna grandis was very abundant. Also in September and October I observed quite a large number of Lestes viridis at Rands Fjord.